A Brief History of SUE

Before SUE began, the common practice was to design projects without consideration of underground utilities, leaving them to be dealt with during the construction phase. The utility conflicts caused delays in construction, unexpected and potentially risky situations, increased cost for the client, and in-accurate records. There needed to be a way where underground utilities could be found and mapped with accuracy to be utilized during the design of infrastructure; enters Subsurface Utility Engineering.

SUE, originally called Designating and Locating, began in the early 1980s and was primarily used in highway design by different State Transportation Departments (DOTs) and utility companies. It was discovered that the combination of the technologies Vacuum Excavation and Surface Geophysics could gather data on the precise locations of underground utilities. In fact, the industry terms “designating” and “locating” were developed to differentiate the two technologies, i.e., “Surface Geophysics” and “Air/Vacuum Excavation”.

As the value of SUE became known between different highway engineers in the late 1980s, the Virginia DOT was the first state agency to adopt SUE and regularly utilize it on transportation projects. Not far behind were the DOT’s of Maryland, Delaware, and Pennsylvania. SUE continued to evolve and became more than just a designating and locating service. The service of providing Subsurface Utility Engineering started to include Survey, Data Management, Sealed Deliverables, and the need to obtain liability insurance turning SUE into a professional service instead of a contractor service. Then, in 1989 at the First Annual National Highway Utility Conference in Cleveland, “Designating and Locating” was introduced nationally as “Subsurface Utility Engineering”, later shortened to “SUE”.

SUE continued to grow in the 1990s as the Federal Highway Administration (FHWA) promoted the value of SUE around the country. A value study was completed by Purdue University on the cost savings of SUE, and they found that a total of $4.62 was saved for every $1.00 spent on SUE. The practice was proven to reduce costs by reducing claims, delays, and unnecessary utility relocations. These costs savings added up and on many projects the savings were significant.

In 2003 the American Society of Civil Engineers (ASCE) then established a national standard (CI/ASCE 38-02) that defined the different responsibilities of engineers, project owners, contractors, etc. for collecting Subsurface Utility data, Standard Guideline for the Collection and Depiction of Existing Subsurface Utility Data. The standard established four Quality Levels of accuracy for SUE investigations (Quality Level D, C, B, and A) to be used when depicting existing utility information on engineering plans.

Now, SUE is used in nearly every State DOT and many utilize it as a routine part of their project delivery process. SUE has also expanded to include other sectors, including, municipal roadway, airport, transit, commercial development, water, and wastewater. The ASCE Standard defines SUE as a process, a branch of engineering. SUE has continued to evolve from a combination of two technologies, into a full-blown process with its own set of guidelines and standards. What will SUE be like ten years from now?

Want to learn more about what SUE can do for your company? Give us a call and The Rios Group will host a lunch & learn for you and your team.

A Brief History of SUE 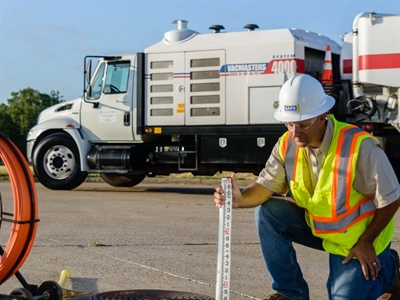 Get to know our Administrative Professional, Maria Huizar